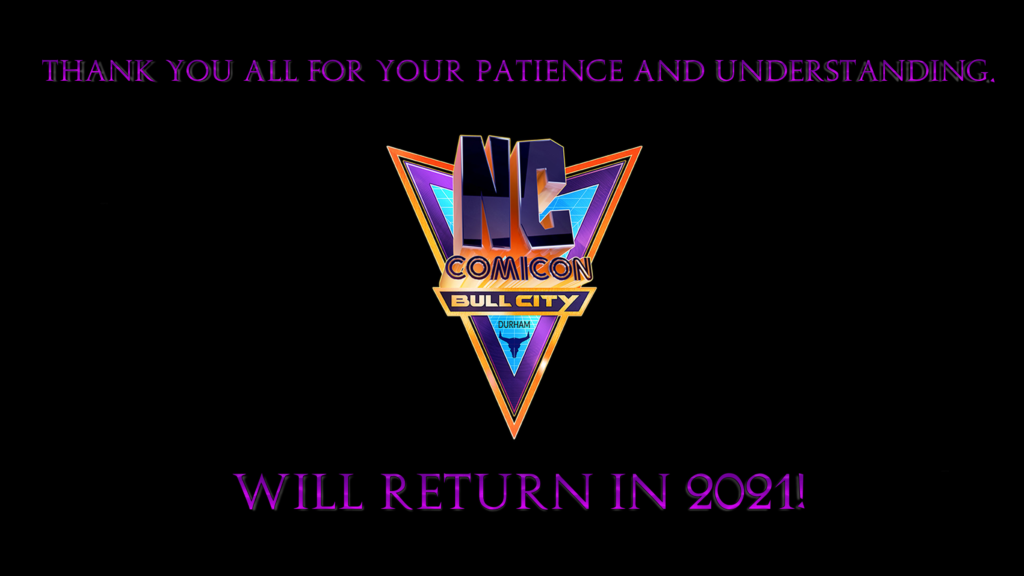 Dear friends and family of the show,

After speaking at length with the town of Durham and the DCC it is our unfortunate task to inform you that it has been decided we must postpone the November NC Comicon at Durham Convention Center to a later date in 2021.

Our staff and crew are saddened by the delay, but after countless months of research and discussion with the professionals we have determined that a show of our size and scale cannot safely be conducted during the height of this pandemic.

The good news! We WILL be returning in 2021, at the earliest date that is safely possible. Our first priority will always be the well-being and safety of our vendors, guests, and attendees, and we have no doubts that we will be able to put on a bigger, better, more fun and certainly more secure show as we adapt in these unprecedented times.

Thank you all so very much for your patience and understanding. We cannot wait to see every single one of you at the new and improved NC Comicon, YOUR hometown show!

Sincerely,
The Staff & Crew of the NC Comicon

Ultimate Comics is partnering with Vault Comics to celebrate the launch of their biggest book yet (pun intended), Giga #1, with an exclusive Q&A with creators Alex Paknadel and John Le!

Join the Ultimate Comics Live Show on October 27th at 7 PM Eastern for this one of a kind fan event. We’ll be chatting Giga #1, Vault Comics, giant robots, the creative process, and more! And you’ll have the chance to ask the creative team behind one of the hottest creator-owned series of 2020 your questions!

We’ll also be debuting not one, but two exclusive Giga #1 “Giga Glow” variants, two of the first Glow-in-the-Dark covers done by Vault Comics! Tim Daniel and Nathan Gooden’s homage to Marvel Comics’ Shogun Warriors #1, these covers come complete with a vintage trade dress. Collectors can pick up the original colored glow variant or the Blacklight glow variant for just $14.99 each or grab the set for just $24.99! Both covers glow in the dark as shown in the mock-ups below. Pre-order today at www.ultimatecomics.com or grab your set live during the show!

You can enter to win a FREE set of these exclusive variants by sharing the linked giveaway post and hitting going on the Facebook event.

The last chance for you to visit us at our current location is December 24th Christmas Eve! Help us lighten the load. Head over today to pick up any outstanding pulls of holds you have. And of course make sure to check out our moving sales!

We’ll be open at our brand new location on December 30th just in time for New Comic Book Day! Our new spot is even bigger and better than ever, with even more room for comics, back issues, graphic novels, toys, and more!

We’re hosting another Ultimate Comics Super Sale with
BRAND NEW stock at our massive 20,000 square foot
location at O2 Fitness next to our Durham/Chapel Hill Store!

We’re keeping things socially distant with only 60 people in at a time! We’ve restocked with thousands of new comics from our super secret warehouse, all $1.00 Each! Fill a Diamond Box (over 200 comics) for ONLY $95. That’s right, a bulk deal on all new stock! Graphic novels, Toys and Action Figures ALL 50% OFF marked prices! We require masks and only allow 1 person at a table at a time. Admission is free, first come first serve!
We’re restocking each day so you will find great stuff every day no matter when you make it over!

Our first ever Ultimate Comics Live Show Batman Day Bat-Tacular! We’re celebrating all things about everyone’s favorite Caped Crusader as we trundle through the streets of Gotham with Bat-Jeremy, Harrison the Boy Wonder, and Bat-Grace! Will they be donning cool Bat-looks? Tune in to find out!

Tune in for a Bat-tacular 5 hour Special on Facebook Live where you can buy the hottest Batman comics and toys from the comfort of your living room. We’ll have hot key issues, full runs, action figures, statues and more! Bat-fans can expect comics from the Golden Age of Batman to Batman Joker War and everything in between, (including but not limited to: Dark Knight Returns, Batman Years 1-3, Scott Snyder’s run on Detective Comics, a full run of Batman Rebirth, classic Neal Adams Batman issues, and more)!

We’ll be giving away a Batman Black and White statue SIGNED by Gerard Way during the show! Head to the event linked below to find out how you can win.

This week at Ultimate Comics!
Ultraman in his Marvel Comics debut, penned by Kyle Higgins of Boom’s Mighty Morphin Power Rangers fame and acclaim. If you’ve been digging MMPR or you’re a fan of Ultraman, pick it up!
Web of Venom Wraith #1! A Venom space cowboy story?? Yes, please!
A special oversize issue for Superman #25 with a brand new first appearance! First appearance of who? We’re not telling! You’ll have to read it to find out.

Hot Books to Pick Up this Week!

Pick Up the First of the Alex Ross Timeless Variants! Then Collect Them All!

Alex Ross is doing a series of incredible portraits of all of your favorite characters in the Marvel Universe! Pick up the first cover, Alex Ross’s Namor, this week with Empyre Fallout Fantastic Four #1. Then be sure to collect them all! And yes, you can add all covers to your pull, just let your local Ultimate Comics know!

We also have some exciting Ultimate Comics Live Show Specials coming up! Like our first ever Ultimate Comics Live Show Batman Day Bat-Tacular! We’re celebrating all things about everyone’s favorite Caped Crusader as we trundle through the streets of Gotham with Bat-Jeremy, Harrison the Boy Wonder, and Bat-Grace! Will they be donning cool Bat-looks? Tune in to find out!

Sunday, September 27th get ready for a giant Ultimate Comics Live Show special! Join your host Siena for a 4 hour show featuring the hottest toys and comics with the amazing deals you’ve come to expect from Ultimate Comics Live! Special guests, retro toy commercials and more, this one is going to be a fun one.
(Siena is digging around the depths of the Super Secret Warehouse to make sure we’re showcasing only the coolest of the cool comics and toys. Don’t miss out!)

UPDATE: Our online form is now disabled. To place an order for curbside or shipping please send an email to ultimatecomicsonline@gmail.com. Please include:

Thank you for supporting your friendly neighborhood comic shop!

Looking for some reading material? Want to get the books in your pull box? We’re offering to ship subscriber pulls and other comics and graphic novels with FREE SHIPPING for orders of $40 or more and a flat shipping rate of $3.99 for orders under $40. Click the link below to submit your request so you can get your books delivered to your door.

Each Ultimate Comics store will be limiting the number of people at any given time and every person that enters our stores, must immediately go to our bathrooms and wash their hands! 🧼👏 This is required! We appreciate all your support and understanding!

Ultimate Comics recognizes the ongoing concerns regarding the COVID-19 virus

Ultimate Comics recognizes the ongoing concerns regarding the spread and containment of the COVID-19 virus, the need for Social Distancing, and the struggle of a quarantine. We care about the well-being of all of our customers and staff. We are doing everything in our power to keep everyone safe and healthy during this time. We plan to remain open regular business hours, unless instructed otherwise, with the following precautions being taken by our staff:

WHAT WE ARE ASKING YOU TO DO

Spider-Woman is back in a new series written by Karla Pacheco with art by Pere Perez! You can pick up the main cover or the J Scott Campbell cover of issue #1 for HALF OFF! Offer good until 3/22 or while supplies last.

Also, check out these other variants available at Ultimate Comics!

Also be on the look out for the super secret hidden variant!